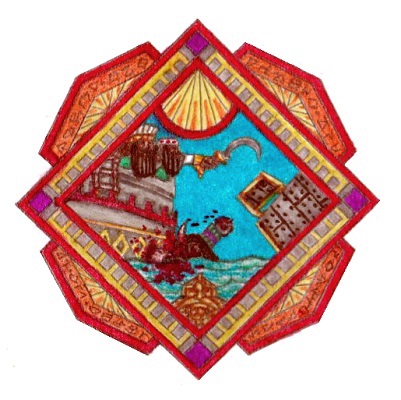 The Infernal Dwarf Captain and the Stone Ship, by Karhemaq Telltongue
There was once an Infernal Dwarf captain serving aboard an ironclad warship. He was a cruel soul hungering for the chance to domineer and crush others underhoof. He was also known for his tenacity, and many believed that he would let nothing stop him once he had put his mind to the task.

One day, the lookout of this Infernal Dwarf's ironclad caught sight of one of our stone ships, flying the banners of Kegiz Gavem in broad daylight. The captain of the steel ship was gripped by a desire to board or sink this enemy vessel, and so he roared out orders on deck and set to the task of sea warfare with vomiting smokestacks. Paddle wheels steamed him closer, swinging in for a broadside, and he ordered his crew to open up with artillery fire.

Yet the Infernal Dwarf had the worst of this duel, and our barrage worsted him. And so he roared out orders to board us. Paddle wheels steamed him closer, and grappling hooks gripped our stout railing. And he ordered his crew to assault us.

Yet the Infernal Dwarf had the worst of this combat, and our warriors worsted him. And so he roared out orders to disengage and ram us instead. Paddle wheels backed water for him, and then steamed him onward at full speed. And he ordered his crew to brace for impact.

Yet the Infernal Dwarf had the worst of this ramming action, and our rock hull worsted him so badly that his metal hull creaked and ripped open as rivets popped. And the whole ironclad sank with all hands, except for the Infernal Dwarf captain.

And so he swam toward us, and our merciful warriors produced a rope-ladder for him to climb and thus save his life if he swore to surrender to the victors of naval battle.

Yet the enraged Infernal Dwarf captain refused this offer, and instead started to crash his horned head against our carved stone hull like a mad bull, throwing himself against floating rock again and again until his horns broke and his skull cracked and his brains burst. And so we left the Infernal Dwarf's corpse dishonourably for the sharks to devour. For stubbornness is a virtue, but stupidity is a sin.

- The Infernal Dwarf Captain and the Stone Ship, by Karhemaq Telltongue, mutilated war veteran and author of fables in Kegiz Gavem