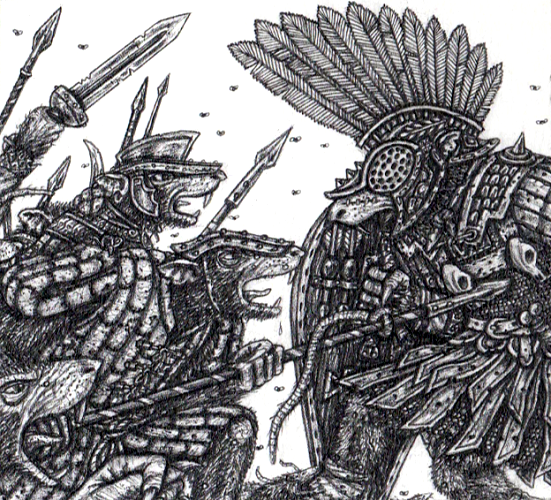 Vermin Swarm Mutiny
Vermin Tyrant Etzakoulos Skritchattik the Perfect was torn apart by his own troops following a lost battle east of fallen Avras. The majority of his forces managed to retreat most shamefully intact, outrunning their Human pursuers during a lengthy chase. When Etzakoulos finally had rallied his exhausted and ragged soldiers, he proceeded to high-handedly harangue them and blame the entire defeat upon their cowardice and moral flaws. The fuming Etzakoulos went on at length, and after a while he started to relish the sound of his own voice chittering with righteous fury. And so he speaked, and speaked, and speaked, heaping abuse upon his entire army and singling out every single unit under his command to criticize them in particular in scornful detail.

Inititially, the wet and stinking Vermin weere overcome with shame and self-loathing, but this soon changed into indignant wrath at the presumptuous and insulting speech of their commander. Glares and angry hisses shot out from the armed crowd, growing more numerous and threatening by the minute. Yet no one dared to lift a finger in defiance while Etzakoulos Skritchattik the Perfect stood surrounded by his lethal Vermin Guard, who knew their continued high pay and outrageous privileges depended upon the survival of the warlord. Yet Etzakoulos managed to trample even his fierce bodyguard under his waggling tongue, spitting toward them and calling them the "gilded scum of the earth, those pampered litter-kin gelded of both manhood and tail."

After exchanging murderous sideway glances, the Vermin Guard suddenly stepped backward and left a wide, open semicircle around the babbling Vermin Tyrant Etzakoulos. Taking this cue, the rank and file Rats-at-Arms immediately seized the opportunity to rush forward in a screeching wave and tear their hated leader to tiny bits, which they then fed to a swarm of Giant Rats, who were then maimed of all four legs and piled in a heap. This nightmare mound of screeching rodents containing the devoured remains of Etzakoulos were then scorched to cinders and blackened bones by Naphtha Throwers, and their ashes were heaped in a dung pit.

Thus perished Vermin Tyrant Etzakoulos Skritchattik the Perfect by the hands of his own host.