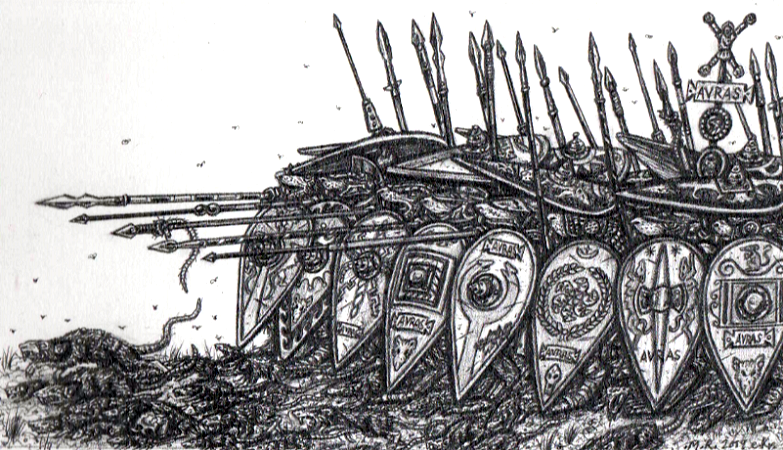 Vermin Swarm Testudo
A truly ancient tactic long used by the Vermin Swarm is the unleashing of rat swarms from infantry units packed close in tortoise formation. No one knows how the ratmen manage to control most of the small rats massed around their paws until the moment they are released. Some speculate that Rats-at-Arms carry with them bags filled with small rats which are emptied at a signal from the commanding officer, yet most eye-witness accounts attest that many Vermin Swarm infantry formations are accompanied by a chittering mass of small rodents at all times on the battlefield. Whatever the exact workings behind this mystery, the symbiotic relationship between animal rats and sentient ratmen remain a primary reason why their ilk is called the Vermin Swarm.

The sudden onrush of bestial rat swarms from out of cohorts of Rats-at-Arms has time and again swayed battles in the Vermin Swarm's favour. It is especially useful as a surprise to disrupt enemy charges before they reach the shields of the Rats-at-Arms, or to buy time for the warriors to make their escape from a losing fight. The combination of rat swarms and closely packed infantry formations have also been used to soften up an enemy and give the Rats-at-Arms a much needed edge in combat. Even at the best of times, the questionable discipline and combat performance of Vermin Swarm infantry has long required an array of innovative tricks up their Tyrants' sleeves, including attached weapon teams, rat swarms and concealed flanking units to assist the mainstay Rats-at-Arms in the bloody grind of melee before their vermin nerve gives in. Such are the crooked tools with which victory is clawed into the grasping hands of chittering warlords, the true rulers of fabled Avras.

This concept is all Uther the unhinged's idea of a Vermin Swarm testudo formation unleashing rat swarms from under its shields, from over on Chaos Dwarfs Online. The drawing itself is heavily based upon AMELIANVS' drawing of Narses overseeing training. The kite shields are to aesthetically tie in with Mediaeval Roman Skoutatoi troops, while the shield designs are based off Roman ones from Classical (both Republican and Imperial) and Late Antiquity. The helmet and spear designs are likewise plucked from all over the Roman timeline, and include both a rat-adapted Apulo-Corinthian helmet and some headgear based on horse armour. The signum standard is topped by the symbol of the Last Human Ruler of Avras Quartered by Four Vermin Hulks.