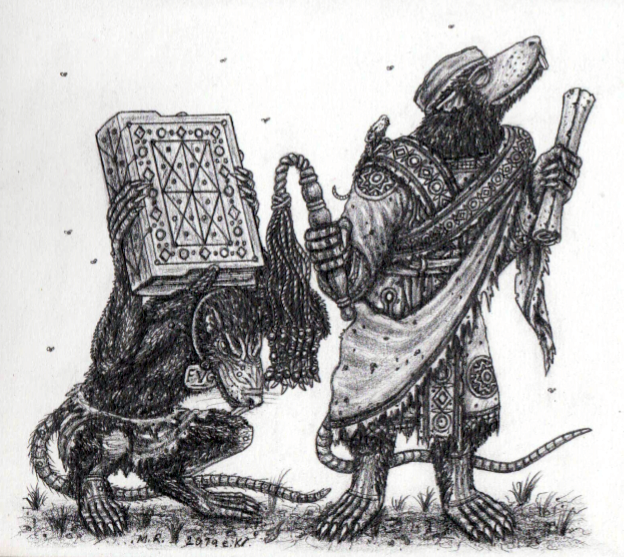 Vermin Swarm Scholar
Sizeable parts of the learning of ancient Avras of the Humans have been carried on by the ratmen that claimed supremacy over its fallen civilization. Much of the ancient heritage of literature, science and wisdom has been lost to the teeth of time, yet what remains of the old lore in the frayed and treasured libraries of the Vermin Swarm has been expanded with new works and new insights gained through the ages. Many classical works survive only in parts as excerpts or quotations in ratmen's compilations, while only a few books remain of many multi-volume works. Often the final loss of books have been due to starved vermin kin gnawing up parchment and papyrus in a mad scavenging for food, or due to rat swarms finding a tiny entrance into lead-sealed scroll containers. Such constant danger to the corpus of hand-written tomes only increase the value and prestige of owning books, and commissioning them to be written.

The upper classes of the Vermin Swarm are strongly classicizing in their approach to higher culture. Understanding ancient languages and being versed in the classics is an important element in what sets them apart from the teeming plebeian masses below, and from the barbarian nations outside. Scribes and scholars who come into the favour of Vermin Tyrants enjoy lavish privileges and access to slaves and resources which most ratmen could only dream of. Such succesful learned ratmen tend to grow proud and arrogant toward underlings, and are in turn despised by commoners as a result. A persistent strain of self-important philosophers among the Vermin Swarm finds a perverse joy in writing abstract treatises on liberty with one clawed hand, while whipping their slaves harshly with the other. Consequentially, many a renowned ratman scholar's career has ended abruptly when he was torn apart by his long-suffering household slaves, or lynched by offended commoners or Rats-at-Arms in his master's employ.

Drawn at the request of @piteglio.