Fellow T9A gamers, it's finally time for the annual balance update. Not a moment too soon! Find all information about it in our news.

Dear T9A fans,
we have an announcement from the team in charge with the Hobgoblin supplement, who would like to provide you some information about where they're heading to:


Ok, so you’ve probably read the announcement or seen the title “Hobgoblin Supplement” on some staff, and if you haven’t…well there’s a new supplement incoming.

So you’re probably wondering, what will the Hobgoblin supplement look like? How will they play? How will the army differentiate itself from Infernal Dwarves or one half of the Orc&Goblin book? Well today I hope to have those answers for you. Before we begin though, note that no specific unit details will be given, as the book is still being worked on and is subject to change; with that out of the way let’s begin.

A quick point to remember, the book will be borrowing units from other books, mostly Infernal Dwarves. This is to keep things as simple and familiar as possible, but don’t assume that everything is exactly how you remember it… always double check.

Now, how do Hobgoblins go to war?

Firstly, the Hobgoblins have been vassalized by the Infernal Dwarves. This means a portion of their troops are loaned out to their conquerors and they also engage in frequent trade. This means that Infernal Dwarf equipment is going to pop up in the Hobgoblin army, but in a much more limited fashion. As they are not making these weapons and armour themselves, they rely completely on trade to get any of it.

But outside of that, Hobgoblins distinguish themselves from Goblins in a few ways. They are much more militarised, organised and are better at working with animals than their close cousins (so don’t expect the same madness of regular Goblins). They also are religiously closer to Infernal Dwarves than Goblins, a trait that the latter are not exactly keen on.

Hobgoblins are also quite self-aware of their shortcomings. They are not as strong as Orcs, as tough as Dwarves, as courageous as Humans or as skilled as Elves. Instead Hobgoblins make up for this where they can, which mostly involves their use of animals, their skill at hunting them and superior equipment. A Hobgoblin army will mostly focus around heavy cavalry with ranged units as support.

While this might sound like Kingdom of Equitaine, don’t be so hasty, Hobgoblins do not ride horses after all. Instead specially bred wolves are armed for battle, coated in spiked barding and mounted by an armoured Hobgoblin, over-compensated with gear. In fact, the jury is still out on if the Hobgoblin waving a lance around is the scary part… or the angry thorough-bred carnivore he’s sitting on is instead.

But don’t think that Hobgoblins will be able to pull off 100% cavalry lists though. They just don’t have the resources to fund that much armour. Which is where their foot units come in. Hobgoblin infantry are numerous and can be given plenty of equipment, but the better armour is saved for the mounted elites, so don’t expect them to be going toe-to-toe with Imperial Guard any time soon. It’s a tough job, but someone’s got to keep opponents still so the cavalry can come in and perform clean-up.

Larger beasts are present as well. Hulking herbivores with howdahs mounted atop them to give the Hobgoblins a safe vantage point. But not absolutely colossal monsters; they need to fit into a stable after all.

Hobgoblin ranged units will also benefit from equipment as well. Blackpowder weapons might take a while for their archers to get their heads around them, but they are learning.

Hobgoblins also don’t have much of a hero culture, their overall poor physical strength has lent more towards a society where you stick to the rules and fight in formation, or you get killed off very quickly.

Lastly, what was the inspiration for the Hobgoblins? Now, most people were probably expecting a more Mongolian take on these guys, as that’s the one common trait you see between modern depictions of the race. But here we went with something different that focused on similar things to the Mongols (that being cavalry and archery). Here the Hobgoblins draw inspirations from Sassanid military units and tactics; while trying to keep this army clearly more fantastical. So this won’t be a one-for-one of playing the Sassanids on the tabletop (although don’t let that stop you using whatever models you feel like). 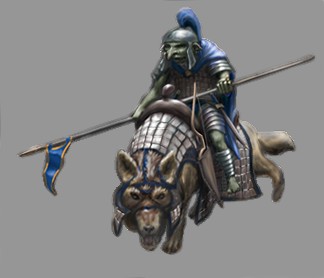 So there you have it, a roundup of what to expect when the Hobgoblin book drops. A race of people with a strong culture and a willingness to end most discussions with a declaration of war. A focus on heavy cavalry, but enough flexibility to not rely on it for everything. Stronger in armour and animal than they are in arm, let us see if their scimitars bite is worse than their mounts bark.

From @Tyranno, on behalf of the Hobgoblin Supplement Team
No comments available