Straight from @Scottish Knight, the loremaster off T9A, we have a sneak preview for some off the background lore for the Dark Gods.

Later in the week we will also reveal some of the artwork for the WDG book, including some sketches that show how the artwork grows from idea to finished product.

But since we are really proud of the artwork I want to give you a look at one of the designs for a Warrior of Pride! 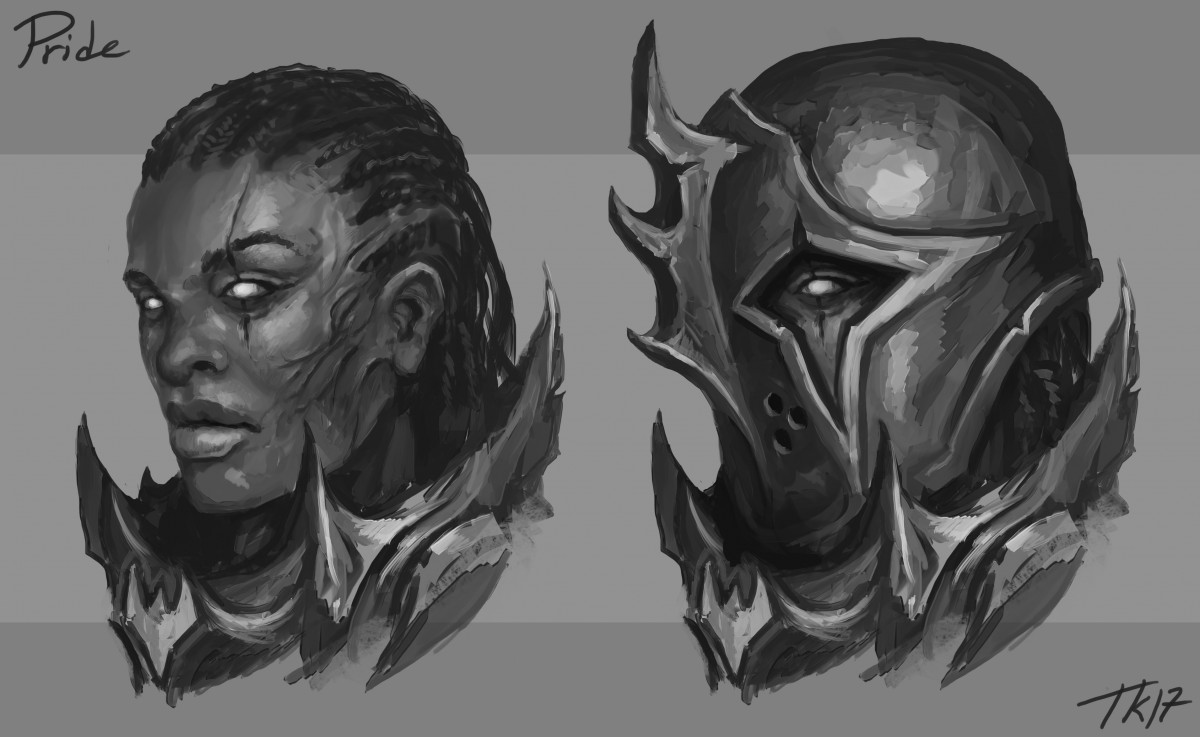 Now for the background reveal:


The Dark Gods are entities in the Immortal Realm, feeding on the destructive impulses of mortals, and collecting those who would choose to willingly sell their soul to pursue an existence free of the restrictions of civilisation.


The current Dark Gods will be familiar to players, however what they have lacked is an original identity. In the search to provide this, we explored all manner of ways to divide and identify the Dark Gods, while retaining the strong sense of undermining civilisation and its rules.
As a result of this process, we decided to move forward with the following 7 Dark Gods - Pride, Lust, Wrath, Gluttony, Sloth, Greed and Envy.


Hopefully you are still reading at this stage, and I will explain some reasons why this basis was chosen:
The CDS and ADT will be able to provide more detail on how these concepts will inform the design of the Warriors in the upcoming Army Book. In the meantime, I have set out below an excerpt from the draft background on each of the Dark Gods and their worshippers, along with some concept art for Warriors sworn to these Gods.


Many of you will have recognised that the basis for the Dark Gods comes from the 7 Deadly Sins. However, I would like to reassure players that while that gives us a helpful inspiration, it does not mean Christianity will be incorporated wholesale or that the game will become heaven vs hell. Rather each of these vices represents a positive quality which can be subverted by the Dark Gods: confidence becomes pride, industry turns to greed, patience to sloth, conviction to wrath, ambition becomes envy, passion turns into lust and self-care becomes gluttony.


Below are the Dark Gods, with the names given to them by their worshippers, which have spread out among the people of the world. Many cultures have their own terms, and each civilisation will fear the influences of some Dark Gods more than others, but the names have been spread for many centuries to draw in those who would live free of constraint.


Savar, the Fallen Star, God of Pride
Those who fall from exalted station, whose pre-eminence is never recognised among their own people, or are passed over for promotion find a natural home with the Fallen Star. He gifts them with the strength to realise their ambitions, displaying their achievements proudly and shunning lesser enemies.


Kuulima, Lady of Flies, Goddess of Envy
Some followers of the Lady of Flies see her as the great leveller, to bring all to level footing and be judged. Others have more base motivations, and simply grasp for what others possess. Those in poverty, the dispossessed and unrequited lovers turn to the Lady for the means to extend their reach.


Vanadra, the Adversary, Goddess of Wrath
At the vanguard of the Dark Gods’ forces, the followers of Wrath have a well-earned reputation as deadly enemies. The oppressed and falsely accused have always numbered among Vanadra’s servants, empowered to hunt betrayers and oath-breakers, until they are consumed by a thirst for vengeance.


Sugulag, the Collector, God of Greed
To the servants of the Collector, all things are their possessions to be claimed. By conquest or cunning, the hoards of their greatest members rival any monarch. Misers and smugglers have often found a place with Sugulag, as they seek to retain their rightful rewards.


Nukuja, the Sleeper, Goddess of Sloth
In the black eyes of the Sleeper’s followers, it is said you can see your death approach. Prophets of doom have long sworn to Nukuja, and been granted visions of death and destruction in return. The Slothful endure though, determined that their inscrutable gaze will witness the end of all.


Akaan, the Devourer, God of Gluttony
The great maw of the Titan is never sated, and his followers devour all before them in a horrific parody of natural hunger. Gourmands, drunks and those with darker appetites may turn to the Devourer to meet their twisted needs, yet they soon find their outward appearance just as disgusting, all thoughts of aesthetics long since fled.


Cibaresh, the Tempter, God of Lust


Though sadists, masochists and lechers are drawn to Cibaresh’ promises of indulgence, the true delight of the Tempter is to seduce the righteous, placing snares in their path to entice them towards ruin. In battle his followers have a similar allure, threatening to overpower the senses of even seasoned soldiers.

Come back later in the week for more background material!
No comments available